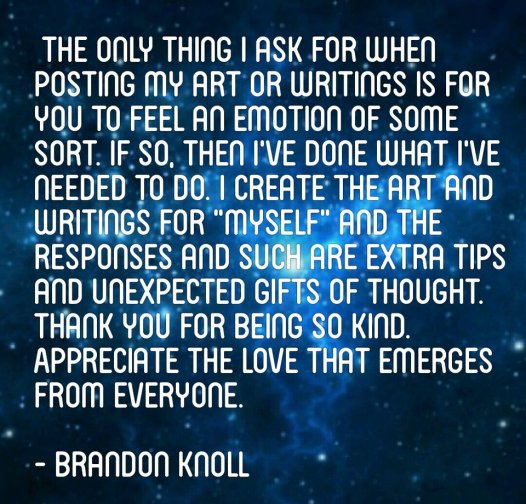 Making art and writing keeps me sane in this “insane” world

Albert Einstein “insane” To do something the same way over and over and expect different results.

I look at art and it’s completely sane.

Every time I create it’s a new experience and not boring or the same. Clicks some life into my soul.

“Insanity is doing the same thing over and over and expecting different results.”

Albert Einstein has another quote talking about how the imagination is the only thing to set you free. I totally agree with him on this one, without it, I’d feel like a prisoner locked up in this world.

“Imagination is everything. It Is the preview of life’s coming attractions.”

My imagination is the only thing keeping me alive and running.

Without It, I wouldn’t know what or who to be.

Thank you imagination for being there for me when no one else is.

You’re always there and never a nonsense.

We accept each other and make the most creative ideas you can think of.

Thank you imagination and have a great day!

When I sleep every night it’s rebooting my imagination for new ideas and thoughts.

Every moment and day is a new moment to create your life into a better one.

That “one” stupid or nonsensible idea you had, could possibly change the world to be insane to sane.

Don’t give up on your dreams and ideas, not everyone will understand you. The ones who do will come to you at the right moment.

But you and your imagination understand each other like no other.

I’ll never be breaking up with my imagination. I appreciate every moment my mind thinks and creates creative ideas.

If you were to enter my mind it would be full of fantasies, unrealistic thoughts, and adventures. It would be one crazy ride/adventure for you to enter.

I try my best to express what’s going on in my imagination. Many things are confusing within it. Like another language/dialect of some sort. So deep some don’t understand and will say I’m “insane” or judge.

It’s a game of pointing fingers and the talk of the ego.

We’re all insane. If you reckon, to not be insane. You’re probably are insane yourself.

Be aware of what you’re thinking before you think the first thought. Don’t just do unless you know what you’re doing.

Lose the self-worth and accept others for who they’re. All of our values end up to be equal at the end of the day. Sure, you might own a yacht or things people don’t, Or whatever you think is in your mind. But at the end of the day we all sleep, eat, and shit. The actions you do through the day create the life you choose and who you’re, not others peoples lives. Your life, the reality you live in.

The imagination is my best friend. I don’t feel sad or “depressed” saying this. I’m proud and happy we have the best relationship we can have.

I couldn’t imagine what I would do without you imagination

Not everything I think is released, but I try my best to explain the thoughts I have and continue to have.

I question why I have the thoughts I do or how I come up with them. What thoughts were I thinking to think these thoughts?

Life blows my mind it’s hard for me to understand anything. The simplest things. I look at a leaf or my finger and each has a “print” or identification.

Why this, why what? I’m like a little kid, I have a question about everything.

After asking the question I’ll have another question after that question. It never ends, hahaha.

The infinite imagination, the ideas, and numbers never end.